Why should I buy an e bike?

A few years ago, you’d be hard pressed to find me on an e bike – or any bike, for that matter. It had become one of those things that fell by the wayside, as you shuttle kids to and from school, daycare, and any weekend activities, you try to find the time to fit it in, and realize it’s really difficult. We couldn’t even take bikes with us camping, because we didn’t have the space to bring them with us. I went from biking daily to maybe once a year, if I was lucky.

I’m a huge fan of technology, and since I was about 15 I’ve wanted to own something that’s fun to shoot around on (originally it was a Tomos Targa LX Moped) that wouldn’t cost an arm and a leg. I started looking at Craigslist to see what I could find.

Coincidentally, my brother started a bike company in Kamloops and, as he was already big into biking, I realized how much of an escape it is from the daily grind of eat-sleep-work. He now has several bikes – one for snow and off roading (a fat bike), one for downhill, and one for long distance street treks to Lac Le Jeune. I still had the same bike that I rode back in high school, before I owned a car.

Things in the past year changed for us though; we got a bigger vehicle to haul the kids, their bikes, and to actually have fun on camping trips. I recently met the owner of Vintage Iron and test rode one of their bikes at one of the many trade shows and expos they frequent. It took a few months of back and forth, but the rising cost in gas and the fun factor of a bike that looks cool and “just goes” had me settled on getting a Super 73. It has some nice retro styling, and every review I had read about it spoke to the head-turning looks and fun ride that Lithium Cycles created when they kickstarted the bike back in 2016.

I just didn’t realize how hard it was to find one! Vintage Iron had several in stock but they disappeared in a snap, and waiting to get new ones could be months away. Luckily, they managed to find a suitable replacement: The Navigator. I drove out to Vancouver to test one (with my son in tow) and made the instant decision to get it, and I could even see it being put together on the bike jack at their shop. Al walked me through the parts and build and made the whole process easy. 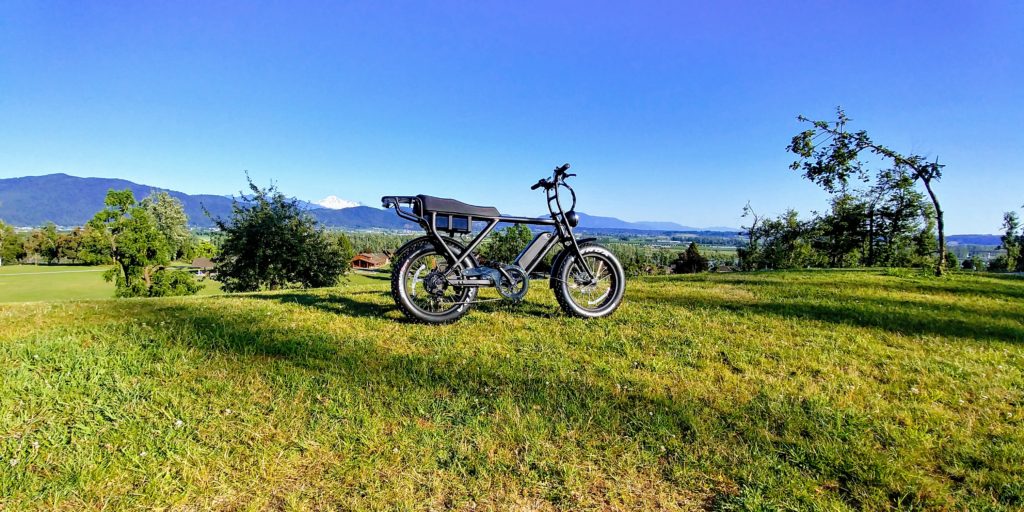 Why would you want an electric bike?

Personally, I think the biggest single advantage is the hill climbing. We live near Vancouver in an area where, from the middle of town to where we live, you can find yourself climbing 300 feet. It’s a big deterrent for a lot of people, and I see some elderly bikers have to stop on the way several times as they make their way home. Having a bike in general is great for your health, and there have been studies that e bikes don’t actually make you lazier, they just help you go further, with riders experiencing physical exertion 95% of the time – so you can’t even consider it “cheating”.

The other big factor is the savings. If you’re commuting daily and can take the extra time to bike, you can save yourself licensing, insurance and gas costs, and have fun doing it. We have two friends who use scooters (a similar idea) to get to work, the only difference with those is that they’re much heavier, and even though they do have pedals on them, you don’t want to pedal them for fun.

What e bike is right for me?

Lets back up a second – while I was comparing different brands and models, I realized you could go two ways: Buy a kit and DIY your own bike, or find one that is already built. I wasn’t about to DIY my mint green bike from the 90s, but after seeing what was out there I was fairly certain I liked the idea of fat tires and off roading in electric style.

Now, there are a ton of different styles and models to choose from. If you’re a purist, you can get a seemingly run-of-the-mill downhill bike with a mid-drive motor, or if you’re in it for the long haul (we’re talking something you can keep in the family), you can pick up an amazing Ruffian or Ascot and ride in style. I went for middle of the road – something fun that I can take the kids on and go for an extended ride, and something I’m not afraid to scratch up. The Super 73 didn’t have the long seat I was looking for without special ordering, but the Navigator did. It also had extended battery life and a lighter frame. I’m happy to say, after buying a harness for our youngest, both of the kids have gone for rides through the many parks in town with me.

My dad tried out the bike, which he said was really fun, but he had trouble getting his leg over it. For him, I would probably pick up a smaller version that folds up, but at least I know it’s something in his future, too. My wife hopped on and immediately wanted her own “Dodge Green” version of it – so I guess there’s a second one in our future.

For the average person, it comes down to personal style and functionality, as well as a list of “use cases” that I found over at electricbikereview.com: Cargo Hauling, Relaxed Cruising, Trail Riding, Mountain Biking, Downhill, Neighbourhood Use, Kid Hauling and Grocery Getting, Road Bike, Sand and Snow (Fat Tire), Tandem, Touring or Trekking, Traveling (Folding) and Urban Commuting.

For instance, if you’re hopping on public transit, I can easily see someone getting a traveling (folding) style of electric bike, that can come on the bus or sit in the office in a corner.

Was it worth the cost?

In a word, yes. I remember the first time we pulled into the spray park and hopped off, and some kids came up to my son and I just to ask us, “What. Is. That!?” – it’s one of those eye-catching things you don’t even think about as you’re using it, but it turns heads and definitely gets you more active. I found myself leaving my desk in the middle of the day to “go for a quick run” just to break up the work schedule.

I’ve run down to the corner store quickly on it to get things we forgot, or pick up a pack of beer. It beats waiting for the car to cool down in our recent heatwave, and saves the cost of gas, especially when you’re filling 125L at our costs.

Then there’s the bonding time with the kids. They are totally happy riding with me on their own bikes, but are even happier when I can take them on the bike with me. I’m so glad I picked a longer seat and a bike that can handle everything I’ve thrown at it.

This website uses cookies to improve your experience while you navigate through the website. Out of these, the cookies that are categorized as necessary are stored on your browser as they are essential for the working of basic functionalities of the website. We also use third-party cookies that help us analyze and understand how you use this website. These cookies will be stored in your browser only with your consent. You also have the option to opt-out of these cookies. But opting out of some of these cookies may affect your browsing experience.
Necessary Always Enabled
Necessary cookies are absolutely essential for the website to function properly. This category only includes cookies that ensures basic functionalities and security features of the website. These cookies do not store any personal information.
Non-necessary
Any cookies that may not be particularly necessary for the website to function and is used specifically to collect user personal data via analytics, ads, other embedded contents are termed as non-necessary cookies. It is mandatory to procure user consent prior to running these cookies on your website.
SAVE & ACCEPT
Go to Top